2015 started off to a warm, sunny start! On December 31st I traveled down to Florida with my sister to visit our parents. In October, my parents went on an adventure in their motorhome along the east coast. They finally settled on Florida as their destination of choice and you’ll never guess where my 49 year old parents now live…a retirement community. Where my grandparents live. But it’s surprisingly nice, with lots of athletic options, warm pools and “yappy hour”. Yappy hour is where the old people drive down to a meeting point in their golf carts and their little dogs sit around and bark. Essentially the funniest thing I’ve ever experienced. 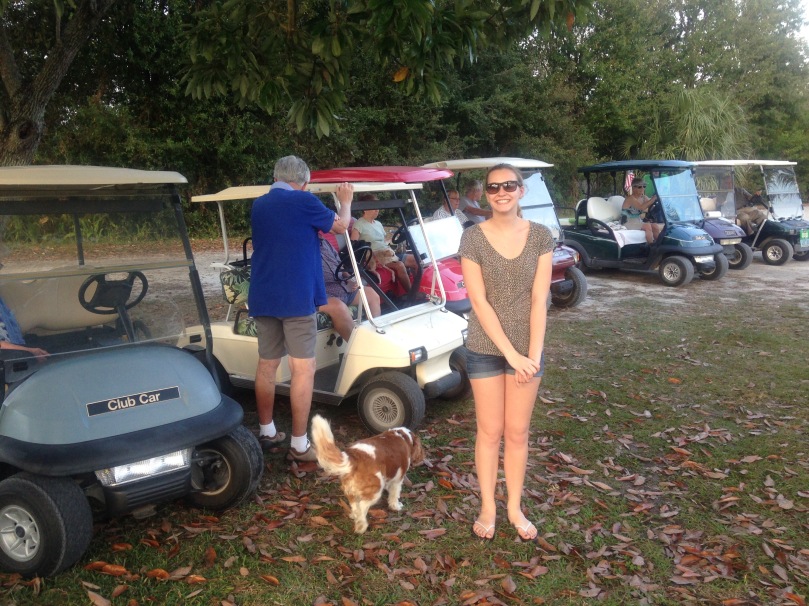 Another fun experience at the retirement community was a game called “pickleball”. It’s a combination of tennis and ping pong, where you hit a whiffle ball with a hard wooden paddle. It was super fun, and the one sport I’m actually good at!! Probably because you don’t have to use much energy to play it.
My favorite day down there was when we went swimming with manatees! They brought us out in a boat to an area where the manatees congregate in the winter, then gave us snorkels so we could see them. As soon as we jumped in we were greeted by a huge, friendly manatee. We were close enough to pet it as it hung around. After swimming for about 30 minutes, we met a manatee that was so friendly it gave me a kiss! I wish I had pictures of this, but unfortunately the company switched our pictures with another family.
Most of the vacation was spent just hanging out as a family, since we haven’t all been together in very long time. We spent New Years eve in downtown Orlando, which was absolutely insane.

We also went to numerous cities, like Sarasota, Captiva Island and Cape Coral. Obviously Sarasota was my favorite city, since that’s where all the nice cars live. Maseratis were so common that my family stopped looking when I pointed them out.
Coming back to -15 degrees in Wisconsin was even harder after a week of 80 degrees and family fun time. But I’m so glad I was able to spend time in a warm climate, but more importantly, my awesome family! Thanks mom and dad, come visit me next time! 😄

Shout-out to this resilient little Cebu blue pothos 💙 I got it at a plant swap and it was in rough shape, so I cut it back. Then my sister's cat ate the only remaining leaf!! It bounced back and is now onto its second leaf 💚
Throwing it back to 2017 when I had to drive boats like this Cadillac De Ville on the weekend 🚢
My fiddle leaf fig finally has new leaves!! It's doing so well, hoping it stays that way after our move this month! 🤞
I don't want to be dramatic, but this is THE most beautiful coffee table I've ever seen. So obsessed!!! 😍