Find out more information about my 100 day challenge by following this link!

The 100th day is finally here! It was a very relaxed, laid back day, with movie watching, reading, and lots of snacks!

Day 99 – April 12th: Met up with my sister and her boyfriend for drinks at Tattersall and dinner at Centro for their delicious tacos and guac!

Day 98 – April 11th: A late winter storm meant I got to work at home and hang out with Luna all day!

Day 97 – April 10th: Ordered from Bite Squad due to the incoming winter storm.

Day 96 – April 9th: Spent a day at a vendor’s warehouse learning all about how to make a trade show great!

Day 95 – April 8th: A beautiful day called for drinks outside on the patio of The Freehouse (the drinks were not free, just FYI).

Day 94 – April 7th: Wandered around the Mall of America and as always, did some great people watching.

Day 93 – April 6th: Another day in the Volkswagen shop! Fixed a few more things on both R’s.

Day 92 – April 5th: Drove over to Wisconsin to check out how much flooding this insane amount of snow has caused.

Day 90 – April 3rd: Another trivia night, where we managed to get 5th place!!

Day 89 – April 2nd: Met up with a friend for a delicious Indian dinner!

Day 88 – April 1st: Thankfully, no April Fool’s jokes were played on me, which is great, since this is my least favorite day of the year.

Day 87 – March 31st: Lunch at the Herkimer, coffee at Spyhouse (my favorite!), and then checked out a local market.

Day 86 – March 30th: Breakfast in Wisconsin, went on a brewery tour of Indeed (highly recommended tour), then went to see the movie ‘Us’ (super creepy and very thought-provoking!).

Day 83 – March 27th: Although it didn’t feel like it due to wind, it was our first 65 degree day! Tony and I took the R’s on a cruise to Stillwater for beers and dinner.

Day 82 – March 26th: Tony made spaghetti, while I made baked potatoes, because sometimes you just need a carb filled meal!

Day 81 – March 25th: Relaxing night in with time to catch up on Netflix.

Day 80 – March 24th: Finally added some greenery to our apartment! Hoping we don’t kill this one…

Day 79 – March 23rd: Tony’s parents came over to check out the new place, then we went to Tattersall for drinks and The Sheridan Room for dinner!

Day 77 – March 21st: Visited Tattersall Distilling for the first time, which was such an awesome venue with great drinks.

Day 75 – March 19th: Celebrated being back in the land of delicious craft beer by visiting Fairstate Brewery.

Day 74 – March 18th: Spent the day in Orlando drinking beer and coffee before heading back to the (slightly less chilly) Midwest.

Day 73 – March 17th: Surprise visit from my aunt and uncle, who just happened to be in Florida at the same time we were!

Day 72 – March 16th: The day of the big race! We went back and forth between track time and snack time.

Day 71 – March 15th: My mom and I “accidentally” visited Petco to see all the adorable kitties!

Day 70 – March 14th: I spent most of the day relaxing in the sun, with a few intense games of ladder toss thrown in!

Day 69 – March 13th: Drove down to West Palm Beach and Boca Raton to visit the ocean and soak up as much sun as we could!

Day 68 – March 12th: Arrived in Florida for our yearly trip for the Sebring 12 hour race!

Day 67 – March 11th: Easy one day work week before we head off to vacation.

Day 66 – March 10th: Drove around Minneapolis to find the best spots to take pictures of the freshly fallen snow.

Day 63 – March 7th: Starting to get more comfortable at work, and actually starting to remember some names!

Day 62 – March 6th: We were officially welcomed as regulars at trivia night!

Day 59 – March 3rd: Wandered around the Mall of America to get our steps in and do some pre-Florida shopping!

Day 58 – March 2nd: Got together with friends for a car maintenance party, and then later for dinner and drinks.

Day 57 – March 1st: Tony went snowboarding, so I tagged along to sit in the lodge and drink!

Day 56 – February 28th: Dinner at Pizza Luce, then Tony and I watched conspiracy videos on YouTube. 😂

Day 55 – February 27th: Back on a BlackBerry!! This time, the champagne KEY2 LE! Stay tuned for blog and social media updates!

Day 53 – February 25th: Spent all day listening to my latest podcast obsession, And That’s Why We Drink.

Day 52 – February 24th: Ate a delicious breakfast at The Egg & I (a restaurant featured in my where to eat & drink in the Twin Cities blog!), visited Barrel Theory to have donuts and beer, and then wandered around the Mall of America for awhile.

Day 50 – February 22nd: Tony and I made our own pizzas! They were so delicious and I have no idea why that’s the first time we’ve ever done that.

Day 48 – February 20th: Another snow storm in Minneapolis! It looked beautiful, and I didn’t even have to shovel.

Day 47 – February 19th: Started reading Small Great Things, which was a lot to deal with, even from the beginning.

Day 46 – February 18th: Dropped off a set of wheels to get coated to make them easier to clean…hurry up spring so I can put them on the R!

Day 45 – February 17th: Cleaned out our second bedroom so I can have a home office/reading room, and Tony has space for working on car models!

Day 44 – February 16th: Took the R into the shop to fix a few small details and make it even more beautiful (and louder!).

Day 42 – February 14th: Happy Valentine’s Day! Tony and I went out to a nice dinner in St. Paul and finished the night with a beer at our favorite brewery, Barrel Theory!

Day 40 – February 12th: Tony and I finally watched (well rewatched for me) the finale of Gossip Girl! We’ve been trying to get through all the seasons for months.

Day 39 – February 11th: Worked my way through an intense but intriguing book, The Lovely Bones by Alice Sebold.

Day 38 – February 10th: Luna cuddled with me until Tony came back!

Day 37 – February 9th: With Tony on his trip, I took the day to treat myself with wine, bath bombs, and loads of books.

Day 36 – February 8th: Tony headed up to Michigan for a snowboarding trip, so I got to spend the night watching all the trashiest TV shows.

Day 35 – February 7th: I watched Tony get way too excited about driving over snowbanks after shoveling. 😄

Day 34 – February 6th: I had an interview in downtown Minneapolis, which gave me the perfect excuse to order a car (thanks Lyft!) and feel like a real city girl!

Day 33 – February 5th: Tony and I met up with a friend for dinner and drinks, in the middle of a snowstorm!

Day 30 – February 2nd: Went to the Hudson Hot Air Affair, where we watched tons of hot air balloons take off!

Day 29 – February 1st: Tony spent the day working on his car, so I went to work to visit him and eat lunch together.

Day 28 – January 31st: Below zero temperatures made for a great movie night in!

Day 27 – January 30th: Stayed inside so we didn’t freeze in the -50 degree weather, and I finally agreed to play a game of Monopoly!

Day 25 – January 28th: I think we’ve finally settled on the furniture arrangement for our living room? 😄

Day 24 – January 27th: Drove 11 hours back to Minnesota, arrived just in time before a snow storm!

Day 23 – January 26th: Flew out to Baltimore to pick up another Volkswagen for the collection: a blue R32! Started the 1200 mile drive back…

Day 22 – January 25th: Had our final walkthrough of our previous apartment, so we’re officially Minneapolis…ites? ians?

Day 21 – January 24th: Cleaning night at our previous apartment so we make sure to get all our deposit back!

Day 20 – January 23rd: Another trivia night, another record beater! We must be getting better at remembering random knowledge. 😄

Day 19 – January 22nd: Checked out a new (to us) Italian restaurant and ended the evening with beers at Flat Earth.

Day 18 – January 21st: Luna won’t stop cuddling with us! She’s always skeptical of new places, so she stays as close as possible to us for the first month or so, which is by far my favorite part of moving.

Day 17 – January 20th: Spent the day attempting to organize all of our stuff, then enjoyed the new 5 minute drive to one of our favorite restaurants for dinner!

Day 16 – January 19th: Moved into our new place! Celebrated with a delicious dinner and beers with our neighbors and friends!

Day 14 – January 17th: For this week’s date night, Tony and I headed to Tori Ramen for another delicious bowl of ramen, then checked out a new brewery: Urban Growler.

Day 13 – January 16th: Another trivia night! We brought 2 different friends this time and did better than we’ve ever done!

Day 12 – January 15th: Officially started packing up the apartment to get ready for our move! Tony and I can’t wait to get into our new place this weekend.

Day 11 – January 14th: Shared my social media knowledge with a friend who is starting a new business!

Day 7 – January 10th: Date night with Tony! We went to Dangerous Man for a delicious beer before dinner at Young Joni.

Day 6 – January 9th: Killed it at trivia with a great group of friends, and enjoyed some delicious beer in the process!

Day 5 – January 8th: Checked some things off my to do list that have been hanging out there for way too long! #feelingaccomplished

Day 4 – January 7th: Talked to my grandma on the phone, who let me know that when she dies, I’m getting her cat, and she’s making sure of that by putting it in her will. Thanks…? 😹

Day 3 – January 6th: Road tripped to Rochester with friends to visit Forager Brewery, which had absolutely delicious food and beers! 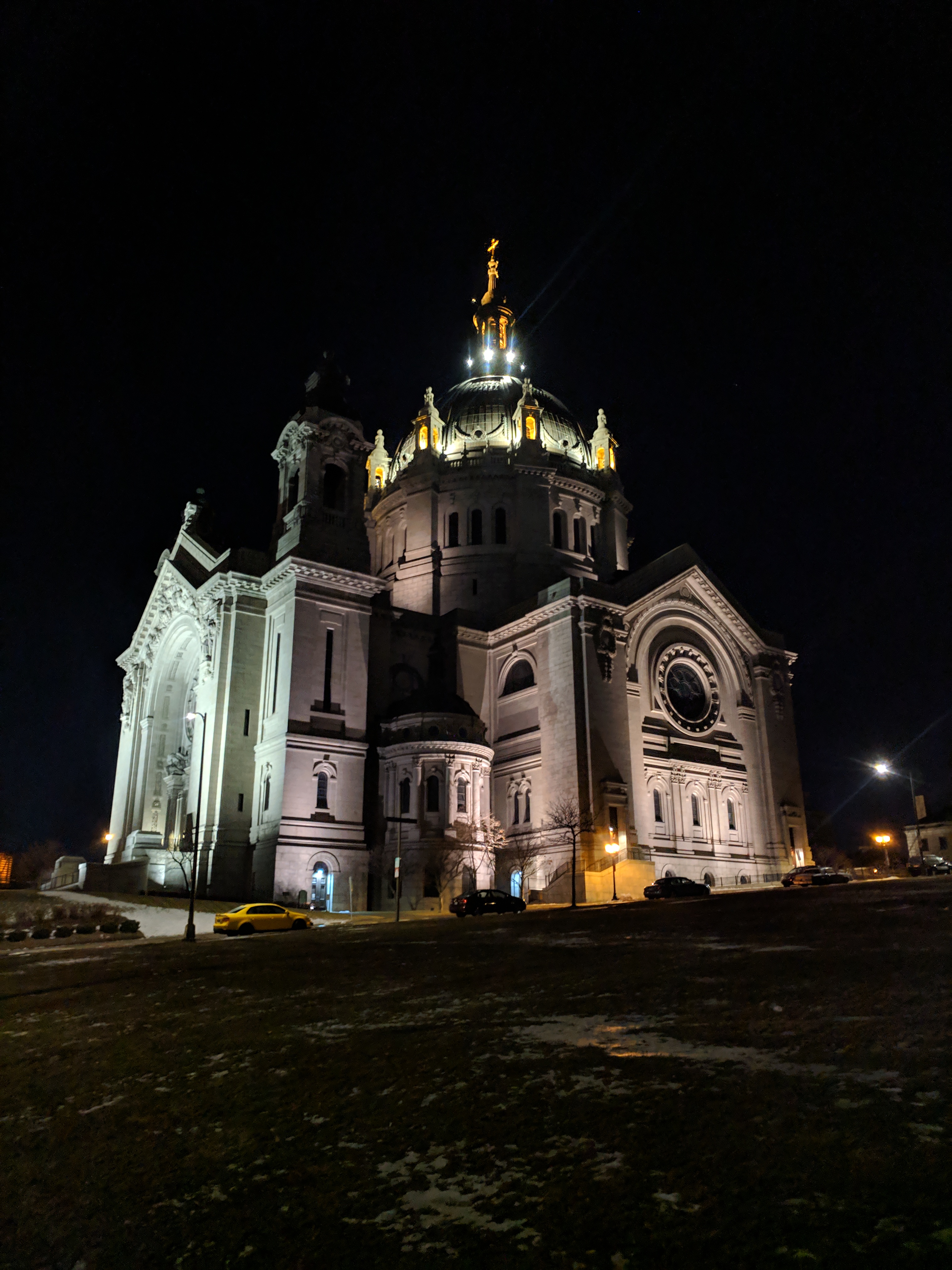 Day 1 – January 4th: I accomplished putting together this blog! Also, Luna let me cuddle with her twice today! 😻

Same location 12 hours apart ⏰
If you tell me you haven't done this, you're lying 🤷🏼‍♀️
The idea of a long weekend in a remote cabin was far cooler than the reality of trying to find things to do four straight days in a row 😂
Inbox zero? Never heard of her.